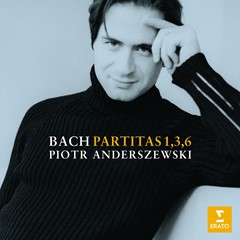 > Partita No 1 in B flat major - Allemande

LISTEN / BUY
BACK
Le Monde de la Musique (Dec. 2002)
Piotr Anderszewski abolishes the gulf which has for a long time come between a significant number of the greatest pianists and the keyboard music of Bach. Since Edwin Fischer, Artur Schnabel, Rudolf Serkin and Glenn Gould, who has mastered Bach on the piano? In these three Partitas, played in reverse order to their chronology, the illumination of the polyphonic writing and contrapuntal work is accompanied by an astonishing intensity... Through his lively playing, varied touch, elegance, lightness of tone and articulation, Anderszewski does not hesitate to highlight with an almost improvisatory spirit the abundance of colours and ornamentation. But his rhythmic clarity, imaginative phrasing, his inflexions which cover an enormous expressive range are also subjected to a rigorous conception of Bach's architecture, in which the sense of timbre and line is always linked to a careful evaluation of the texture.
Rough Guide to Classical Music (June 2003)
Once again, the Polish-born pianist has you hooked from the opening notes, grabbing your attention in playing that is simultaneously satisfying, confounding and somehow deeply tragic... His ability to hold a precise level of touch in repeated and sequential passages makes the playing almost hypnotic at times, and his pointed fugal textures demonstrate a Gould-like sense of polyphony. The piano sound, very similar to that of the Diabelli recording, is as unique as the interpretation - the piano sounds like it's regulated to allow a very varied tone, yet Anderszewski controls it perfectly. An essential purchase.
The Guardian (Nov. 2002)
Nothing is allowed to stand between the music and listener: Anderszewski is the perfect conduit, presenting each movement as a totally unified whole, ensuring every texture is utterly transparent. The directness and simplicity of the results disguise the masterly pianism that has produced them.